One of my favorite foods in the winter is Korean sweet potatoes (goguma 고구마). Sweet potatoes often found and used in Korean recipes are different from the ones we find most common here in the States. There are two main Korean varieties – mul goguma and bam goguma. Mul goguma is more pale yellow in the inside and bam goguma has more a of a golden pale yellowish flesh but both have purple brown skin.  Mul goguma is more often used for baking/roasting whereas bam goguma is for steaming but honestly, both work great and in many Korean grocery stores here the variety isn’t written so I won’t really know which one it is until I go home and I’m peeling a steamed one to stuff in my mouth! Even then, I can’t really tell. (My dad prefers mul gugomas). For the most part, these are much sweeter than the sweet potatoes found in our normal American grocery store. And Koreans LOVE to use these gogumas in everything from soups, stews, side dishes and desserts! The flavors are also found as crackers and chips even, so, basically, really really popular.
And with goguma being in season during late fall/winter, today is goguma tart day! I scoured the internet for some fun tart recipes and was intrigued by this one here. It took a few trials and errors because Korean recipes really put a lot into the guessing game at times. I made this tart in different kitchens, for different occasions (Thanksgiving at the in-laws!!) and in different tart pans – 6 inch circle and 14×5 rectangle. Yums. After baking the tart in our small Boston kitchen, I hulled all of our baking supplies back down to the Northern Virginia area so I could do some holiday baking while we were in town. And, it was a hit! I wrestled with it a little bit and broke out a sweat thinking about taking it to the in-laws but alas, Thanksgiving was delicious all around! The tart begins with a buttery crust. You can use your favorite sweet tart crust, or of several I’ve used, joyofbaking’s tart has given me the most success with the least amount of shrinkage. I added a layer of chopped toasted walnuts on top of the crust to act as barrier between the crust and filling. It was initially driving me nuts that my buttery crust bottom was softening too much from the filling but the wall of walnuts helps!! (you can ask my husband who I made taste all of them like a lab scientist). Finally the tart is filled with a creamy sweet potato mousse and topped off with slightly caramelized sweet potato chunks, nuts and cranberries. The tart is not too sweet and perfectly satisfies the sweet tooth while not being too indulgent. Perfect with a cup of hot tea as a mid-day snack or to wind down after all the shopping going on! 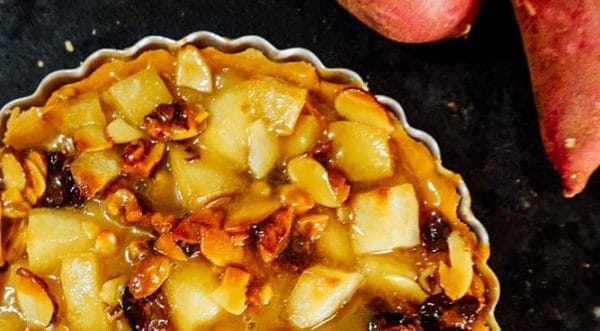