So, I can’t name this blog sweet success AND salty failures without sharing a few fails, can I? (there are so many more fails that aren’t on here)

It’s the holidays and I wore stretchy yoga pants with a hoodie for 4 days straight. It’s nice to be home with the parents to have a home cooked meal – not cooked by me!  What my mom cooks is always delicious without a doubt. Maybe one day, I will get there. But today, I’m very much thankful for my loyal taste tester (husband) who happily eats my successes and (mostly) eats the fails with no complaints. Though, I can tell when something is not as good because he can’t hide anything from me :]
1. the kongnamul gukbab that fell flat (Soybean Sprout Soup with Rice)
That time I tried to be a loving wife for a sick husband and failed so horribly….. My husband came down with a pretty bad cold in September and trying to be a loving wife, I woke up in the wheee early morning hours, drove to the Korean market and came back to start my recipe adventure. I had a few recipes I was eyeballing and ready to blend together but….. alas, I could never get it to taste right, it felt flat to say the least and I didn’t even take a photo of the end product. My poor husband who was sick pretended to eat it but left 3/4th untouched and it went down the drain (literally).
Maybe one day I’ll give it a try again but not now. I’m too discouraged on this one… 2. pumpkin pie cookies that should’ve never lived
Have you tried the apple pie cookies from smitten kitchen? My mom LOVES them. Probably a better idea that I don’t bake them too often because she will devour them. So, it was almost Halloween and why not adapt the recipe for pumpkin? Well, now I know why not to. Pumpkin has a much more subtle taste than apple pie and so it just felt like I was eating crust, which usually isn’t a bad thing except that I put in too much water for the crust too so, yuck. RIP to this one. Won’t probably try to remake this at all. Only the apple pie ones!! 3. i don’t like starbucks pumpkin scones
Note to self – try the original before trying to make the copycat and not enjoying them. A variation of this copycat recipe is all over the internet and I tried 3 of them but was never blown away. They weren’t necessarily a complete fail but not delicious in my books. And then I tried THE one from starbucks and realized I don’t necessarily like their pumpkin scones. So, I was working towards a goal that I would never like. By the way, is something wrong with me?! Why don’t I like these scones? 4. miserably long process of korean fried stuffed eggplants
Korean recipes (in Korea) can be hard to follow. Often, the details are slightly missing. Like, for example, some directions go – add in starch, water and oil until mayonnaise-like. So, I mean, can you just tell me how much of each to mix for it to be like mayo? I don’t know what mayo texture is either? Sigh.
There are two variations of this recipe from two top celebrity Korean chefs and the recipes are clear and vague at the same time. I’ve made this about 4 times now but have not been completely satisfied with the results. THE WORST was when I got tired of being splashed by volcanos erupting in the oil and bought a deep fryer only to find that the deep fryer never got hot enough!!  So after an hour of trying to heat the deep fryer (and cursing a lot), I opted to fry them the old school way trying to dodge the oil eruptions but the stuffed pork in the eggplant would not cook through for the life of me (notice the pinkness?!) Alas, I will stick to beef like I did the first 3 times. This one, I am determined to get right at some point (with beef)…… stay tuned. 5. kabocha squash (missing) cheesecake
Sometimes, two loves don’t make for more love. I love kabocha squash. I absolutely love cheesecake and especially pumpkin cheesecake in the fall. So, when I saw some Korean recipes on kabocha squash cheesecake, I was extra excited!!! Lots of exclamation marks. I quickly sent my husband off to the grocery (because I needed to start right away on the crust) to buy some cream cheese and started on this exciting adventure. Coming out of the oven, these were a beautiful golden color, just like kabocha. EXCITING! And then I waited and waited as the cheesecake cooled, eagerly cut them into little bite size pieces, took a bite and then was so confused. It’s not bad, its just that it tastes like cheesecake. Where did the cups and cups of kabocha go? It’s a golden yellow cheesecake but it tastes like plain cheesecake!! I like standard cheesecake but then why would I put in kabocha?!
I went back to the recipe and read in the narrative that the kabocha flavor doesn’t come through.. face plant. Could you have told me towards the top? Goodbye kabocha cheesecake. So, that’s a wrap for now. Cheers to more fun failures. Thanks husband!! 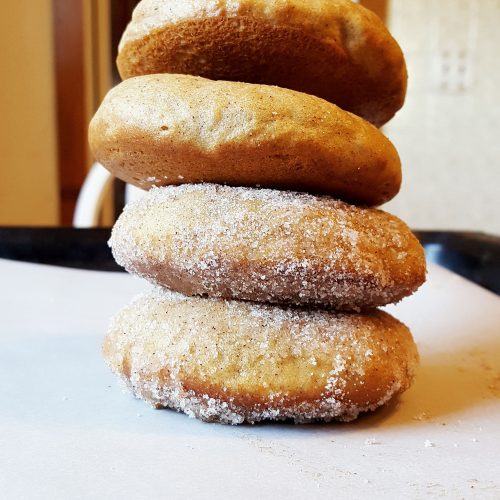 Happy birthday! Celebrated a day early bc of his c

Fun weekend filled with friends, family and lots a

Not sure where the popularity of Korean hot dog br

On this plain old Monday, reminscing about our 3 y

just a few hours ago in Sapporo for our last night