It’s summer! As a kid, I grew up in the suburban areas of Pennsylvania where passing corn fields was a normal everyday thing. Little did I know, that was not normal. I’m not sure if that has anything to do with it, but I really love corn. I manage to eat bags of frozen corn throughout the year and then get really excited when real corn on the cob hit the grocery stores! These deliciously sweet corns are great on their own but are also amazing when showcased as the main ingredient in a dish, like today’s corn chowder. In the peak of summer, the corns are super sweet which really makes out a bright flavor in the creamy chowder. While this will taste great with any form of corn, if it’s summer I recommend trying to use the corn straight of the cob! It’s worth the extra effort and why not eat something in season? What’s also great about this recipe is that it’s fast and you don’t need to turn up the stove heat. We’ll use the help of an Instant Pot and bring out deep flavors of the corn quickly through the pressure cooker. This also means, if you have an instant pot, you won’t be turning on the oven for hours that can really make your kitchen warm. We will though bring up the heat with just enough spicy peppers to bring balance into a creamy dish.

Serve this creamy corn chowder with some toasted bread to use as a spoon or a side of salad. *If you don’t have an instant pot, you may cook this over the stoptop in a stockpot. You’ll just need to turn on the stove and simmer the corn for about 30 minutes instead of 10 minutes in the instant pot. 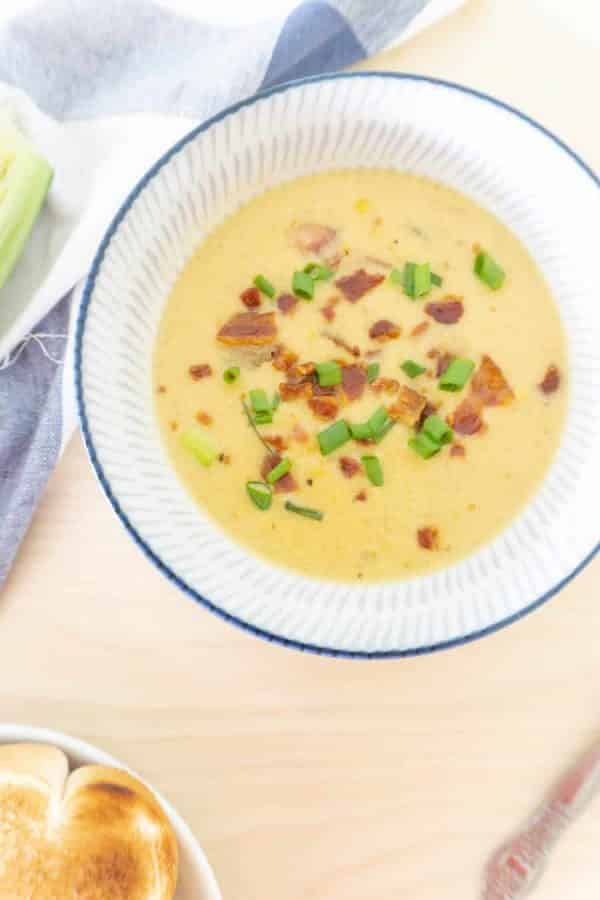 Recipe is barely adapted from Half Baked Harvest!