After marriage, we’ve been eating a lot of pork. Lots – that was basically the only type of protein we ate at home for 3 months. After a visit back to our hometown in DC and eating delicious fish grilled by my dad, we decided to mix it up a bit. We grabbed a huge bag of salmon (and chicken) from Costco – side note – everything at costco is HUGE which means we have a few portions of salmon to try. (I also love running around Costco samples too but who doesn’t…)
Back to the salmon. I did a bit of online surfing and found there are two popular ways to cook salmon in the oven – straight on a baking dish or wrapped in a foil. I decided try both. One for you and one for me. The better outcome one for me.

There was one Donburi recipe that I definitely wanted to try. Salmon donburi is usually served with raw salmon (sashimi fish on top of rice) but we only had cooked fish since our Costco frozen salmon is not sushi-grade, I’m not going to risk thawing it and eating it raw. But I really wanted to try the sauce and it sounded like it would be good with baked salmon too. So, I decided that I’d bake a simple salmon with just salt & pepper in the foil – essentially steaming the fish in the foil. This would be yummy with the donburi sauce – I declared. To go along with this, I found a Ginger Soy Salmon recipe to be baked on foil. Thought the two Asian-like salmon’s would go well together for one meal. Well, let’s say the donburi was delicious but the Ginger Soy Salmon will not be made again. I should’ve known when the recipe called for 1 inch of fresh ginger (or 1 tablespoon of minced ginger) for 1 salmon fillet. It was definitely over-kill. Like a ginger bomb blew up in my mouth. If you absolutely love ginger, this would probably be the dish for you. But alas, not for me or Justin.

(see all that ginger!)
But – the donburi sauce was really really good! It was the perfect balance between sweet and salty with a deep flavor from the onion and garlic that was cooked with the sauce. The sauce was recommended to be eaten with sliced raw onions which added the perfect bite to the meal.
Although we had two salmons for dinner, the donburi sauce was the highlight of the night! Highly recommend. A happy dinner meal. Justin has been really busy with work and school so it’s nice to eat a good meal together so he can take a break and I can chitchat away per usual about my plain vanilla-like day that he listens so intently to. 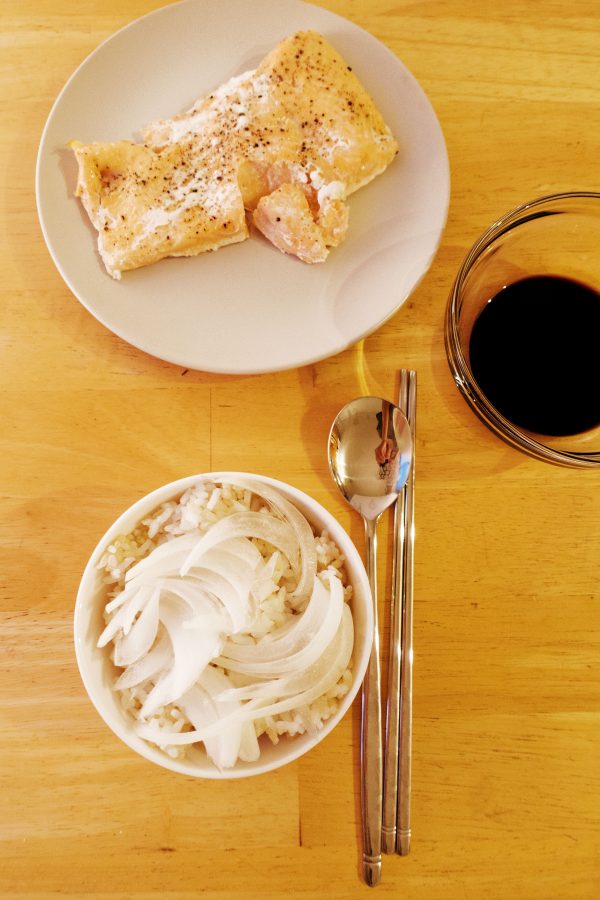