Did I already mention that Korean sweet potatoes (goguma in Korean) are one of my favorite foods to eat in the winter? When I visited home for Thanksgiving my mom stocked up on gogumas for me to steam in the microwave and roast in the oven. Just to emphasize how much I love these purple vegetables, I made goguma bread! It was the most moist bread I’ve had and just enough sweetness all around from the bread and the whipping cream.
The swiss meringue buttercream on the bread gave me the biggest headache with the icing. I threw away 2 batches until I read a lot on google on how to overcome 1) curdling of the buttercream after adding the butter 2) too liquidy of buttercream. You see, I had an issue with curdling on the first batch, curdling on the second batch and then it being too liquid on the third batch which I managed to save!! According to cakecentral, buttercream breaks when the temperature is not right. 1. If it curdles, it’s actually not abnormal and you should keep whipping. If it doesn’t come together for about 5 minutes, heat up a small scoops for 5-10 seconds in the microwave and add it back into the bowl to make the mixture warmer. Or, you can warm it with a hairdryer.
2. If it’s too liquidy, place the bowl in the fridge about 20 minutes and then whip again!
These two methods should really help because I was so close to throwing in the towel but these tricks helped me out from throwing away the third batch. AND this is all worth it for this goguma bread. The moistness keeps for days! The loaf is not that high so if you want a higher standing bread, I would recommend increasing the recipe by 1.5x. I liked the lower standing bread to have more cream to bread ratio.
Hope you enjoy! 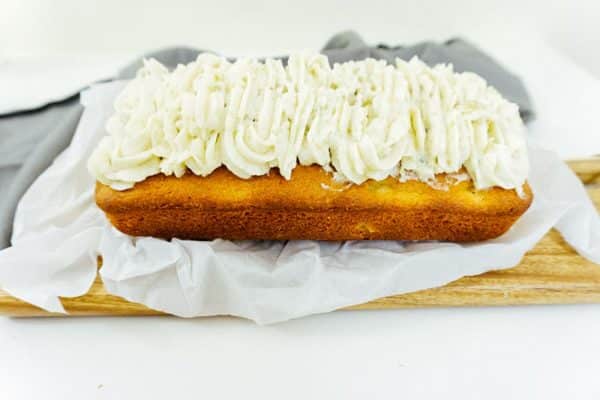