Schedules worked out for my husband and his medical school friends to all have the weekend off so we took a pit stop in NYC before our return to Boston from Washington for Dr. Juh’s week off.

We got to NYC on Thursday, a day earlier than the rest of the group which gave us one extra night to explore. We’ve been there plenty of times so we don’t go overboard on trying to see and eat everything but it was nice to get there a day early to have some needed couple time! Here are some of the highs and lows of the trip.

Hotel:
Orchard Street Hotel – Double Room: The rooms are teeny tiny. It fit our bed exactly, a little side desk and enough space for our bags. But, the room and bathroom was decently clean and we paid for location over anything else. I didn’t want somewhere too low-end but we also wanted to stay near LES or Soho which gets more expensive than mid-town area so this worked out great! The size is small though so only good for a couple or single and I don’t think we would stay there for more than maybe about 2 days without starting to feel too cramped but for a weekend trip, I think I’d do it again! It was about $105 when we stayed (including tax!). My only real complaint is that the curtains were not blackout.

Drink and Eat
Sake Bar Decibal: Fun place for drinks! We’ve been here a few times (separately). It’s a tiny bar that reminds you of Japan. There are so many options for sake, shochu and cocktails at a reasonable price. You can get them 5 oz, 15 oz, or full bottle. I like that we can try a few glasses of different types of drinks. Shochu is stronger though so I’d recommend sticking to sake unless you can handle it! (I found out the hard way). We went before dinner (6pm – almost day drinking!) and didn’t want to fill up so we only ended up getting some takowasa (whoa wasabi!) and fried purple sweet potatoes (meh). I’d probably skip getting too much of the food and go just for the drinks! 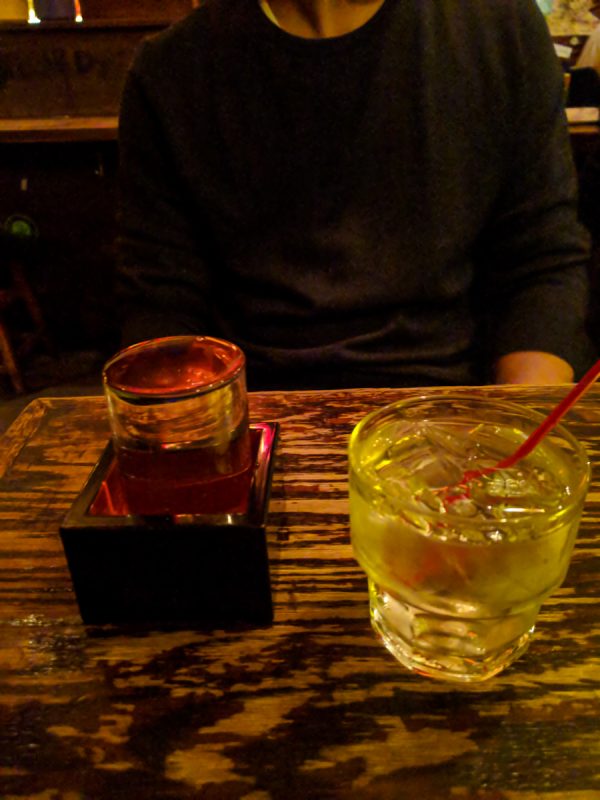 Thursday Kitchen: What a pleasant surprise! After drinks, it was time for some real food. Honestly, I didn’t have that high expectations because I’m not often a fan of Asian fusion foods but it was close to the sake bar and had great yelp reviews! We trotted over and what delicious + a fun place! It was still only about 7:30 so there was no wait for two. I got a fu “capri” drink (think adult capri sun with soju). I went with a “Ruby the GF” that was recommended for something slightly sweet but not over the top. It was refreshing but I’ll probably stick to something like Ms. Cutetini next time (cucumbers and lime).

On to the food, we had the charred broccoli rabe, kimchi paella and the truffle mac and cheese. The broccoli rabe was a nicely charred with a sweet and spicy gochujang-like kick. The mac and cheese was super creamy with small clams – at first, I wasn’t sure what the fusion part of this dish was but I realized it used manila clams which is common in Korean seafood broth cooking. It was really creamy delicious. The final, Dr.Juh’s favorite was the kimchi paella. We thought it would just resemble kimchi fried rice but no. It had a very strong seafood aroma from the paella but with a nice ending kick with kimchi. Can’t wait to go back to try the other dishes. Make sure to get there early because as we left – there was a really long line. 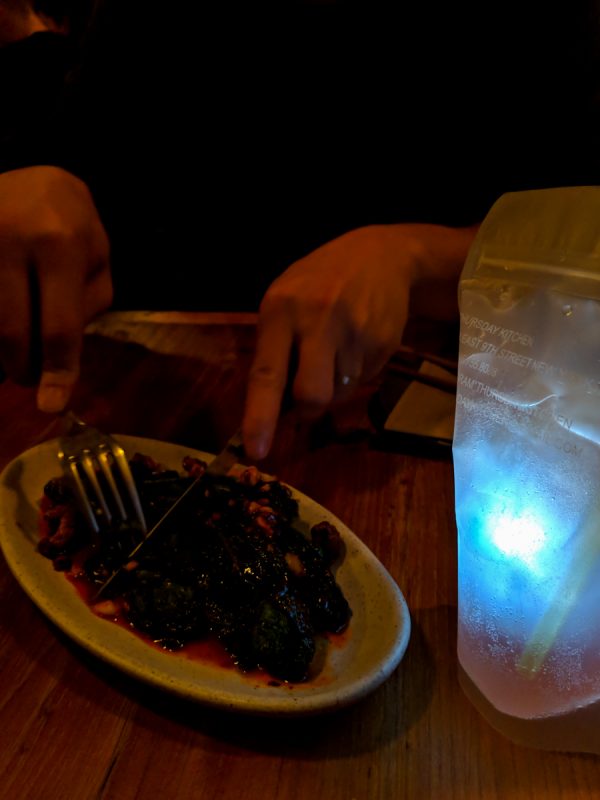 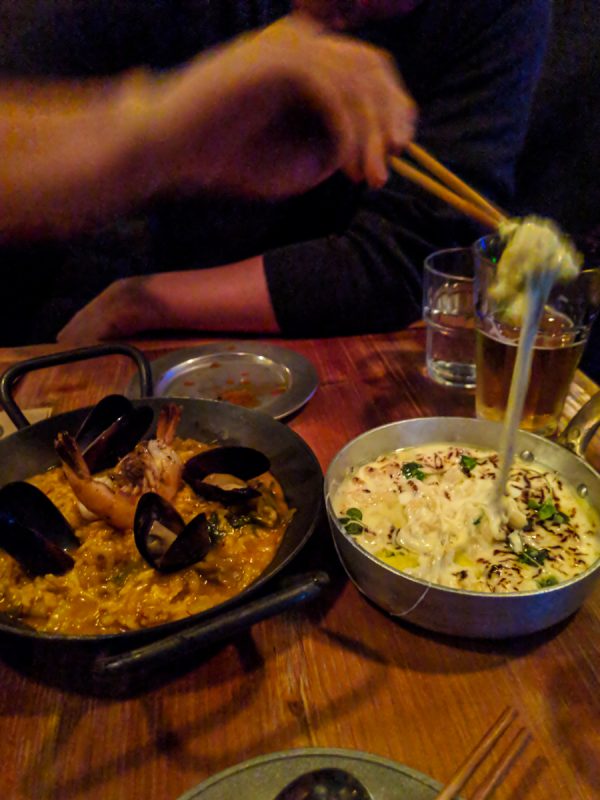 Yopparai: We didn’t stay long enough to know. By this time, I was a bit too full and getting really buzzed. 🙂 Had some sake, butter scallops and agadashi (fried tofu). None of it was super memorable and it was on the more expensive side. We wanted to try the miso cod but twas sold out. I’m not sure I’ll come back here but maybe to give it a real try? The yelp reviews are very good if you’re into that. 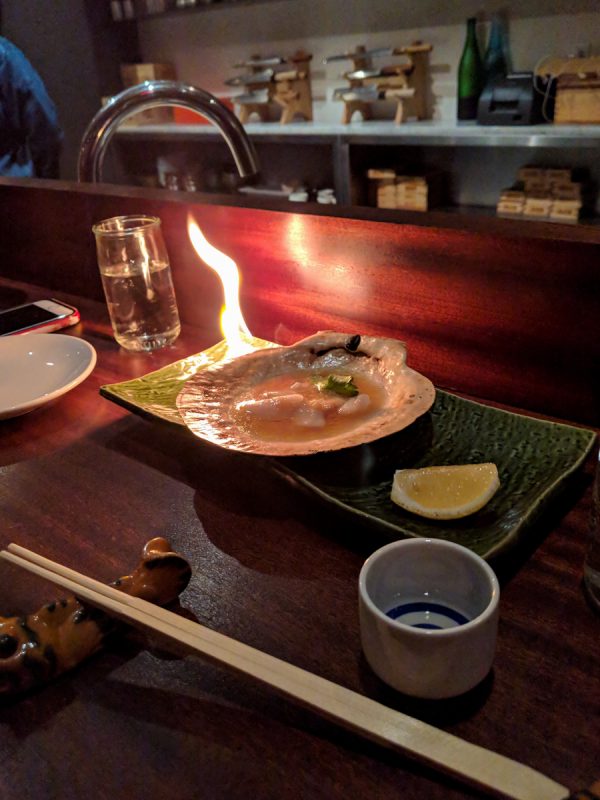 Ramen Ishida: New Tokyo Style Shoyu Ramen! Just, get it. It’s different. DrJuh really enjoyed it. Shoyu based ramen with truffle oil. We’ve never had good shoyu ramen but that one was good. DrJuh really liked the extra oomph from the truffle oil but I could’ve probably gone without it. But the noodles! were so chewy and a texture that we have found in Tokyo but not so much here in the states. I’ll be back to try the others! 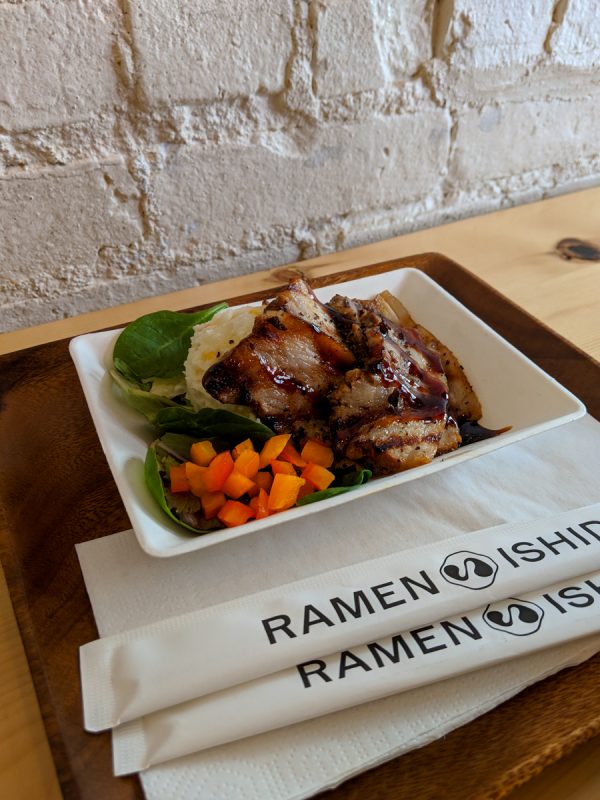 Let’s Meat: Decently priced AYCE (all you can eat) Korean BBQ. $33 per person for the original dinner. I don’t usually go for the all you can eat deals because I can’t eat enough but we had a group of 10 so this made it the easiest. I would say, I expected much worse than we got. Obviously, some of the other places are better but are also pay for each portion so I think this was fairly decent for what you got! It also comes with other things you can order like jjigaes, steamed egg, ddukbokki that are included if you ask for it!

Grace Street: Cute cafe with an abundance of desserts! Good for just two people or 10 with the long tables. It’s pretty loud and crowded on the weekends but the desserts were pretty yummy! We had the hong kong toast, churro waffles, green tea shaved ice, strawberry sorbet and some oolong milk tea.
Must get: The hong kong toast and churro waffles! The hong kong toast was a crispy huge thick toast with some sweet condensed milk in the center and a side of vanilla ice cream. The waffles were crispy (almost felt fried) with cinnamon and a delicious maple. My only gripe about these two is that if they had better quality ice cream, they’d probably be that much more delicious.
Skip: Green Tea shaved ice – it wasn’t bad, it was actually pretty good too but the other two were too delicious. This just took up stomach space.
Ok: The oolong milk tea was actually pretty good – not to sweet but you can probably find better ones in the area. THe strawberry sorbet was actually very good with what felt like were real strawberries in the sorbet but I mean, this was for our lactose friend. Get the toast and waffles.

Bleecker Street Pizza : There was a line out the door but it moved pretty quickly. We got a pizza with sausage and mushroom & a margherita pizza. Both were ok but not worth my tourist tummy. It wasn’t bad but the crust and the ingredients didn’t really stand out. Perhaps, if I lived in the neighborhood I might come by but not a place I would go out of my way for.

Sweet Churros: Decent but not great. I got the original churros in the soft serve and a free dipping sauce (check in on yelp for the free sauce!). I’m glad the sauce was free because we didn’t eat it. Way too sweet – dolce de leche. The dessert itself is cute and instagram friendly but I felt it was a less under-fried with the inside still a bit doughy. The soft serve was decent but more on the icy side than creamy. All in all, I was satisfied but I probably wouldn’t pay $7 for it again unless I’m feeling lazy. If you’re eating in the food court, a nice simple sweet if you don’t feel like walking too far.

And then we ended our Thursday night (before others came) with delivering from Spot Dessert to our hotel and watching some YouTube because anything can be delivered in NYC. 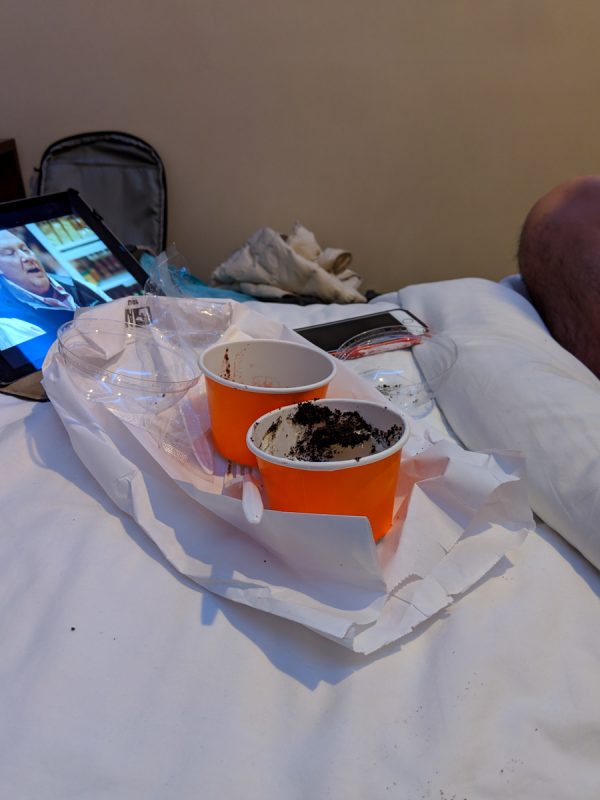 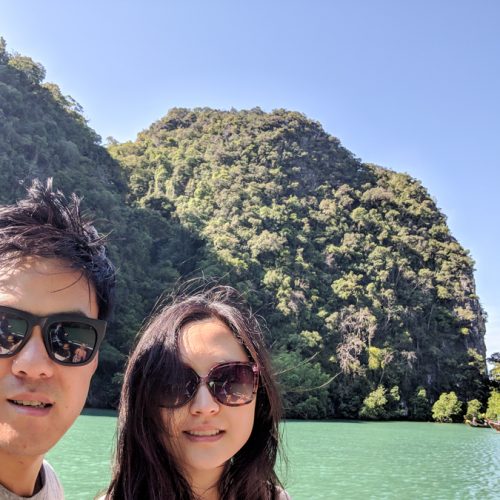 48+ hours of Traveling for Thailand