Call me crazy but I’m not the biggest nutella fan. I don’t dislike it, that would be really crazy but I don’t go gaga over it like a lot of people! (I still love rocher ferrero though but probably more for the crispy texture). My first taste of nutella was when my brother brought some home from his French class. Delicious! My parents obviously became big fans and it became a big treat when they occasionally picked up a jar of nutella and croissants for us to enjoy on a Saturday morning. In retrospect, maybe it was a treat for themselves… Alas, I also went on to learn French! But while I enjoy it, I found many other sweets that I loved too much (i.e. cheesecake). My husband on the other hand, loves nutella. I can confidently say that he was probably the decision maker behind having bought any jar of nutella in our home. He slabs dobs of it on to toast without a care in the world and no regrets (and no working out after either…) We live healthy balanced lives, yea? Well, with all the packing and moving we’ve been doing, I discovered in our dry ingredients box a nutella jar with about 1/3rd left and needing to be used soon before going bad. I said I’m not the biggest fan but I still enjoy it every so often and I will not let a jar of this go to waste! Besides, it’s better for my waistline to make something he enjoys more than I do. Although, I think I devoured this tart at an equal if not, faster speed. This tart starts off with my favorite shortbread tart recipe. Buttery goodness that is so incredibly easy to make in just a food processor. And then it’s filled with an ultra gooey nutella filling – no baking needed. If you’re even a little bit of a nutella fan, this is going to be delicious! 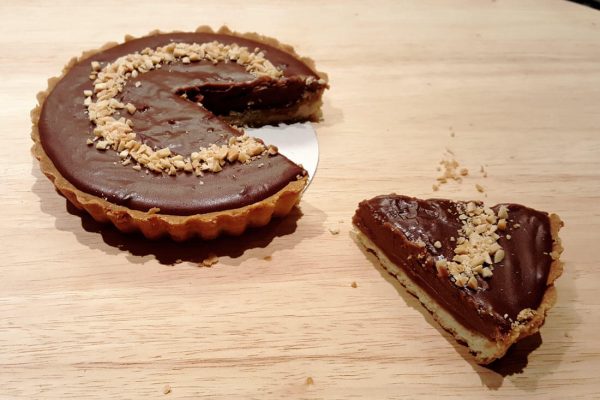